You are here: Home / Sports / How Race IS A FACTOR in the NBA Fan and Player Interactions 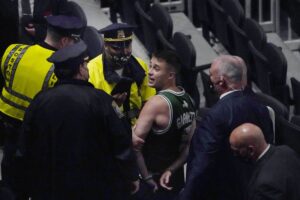 For more commentary on sports culture and socioeconomics, check out Kyrie Irving is Making a Mistake By Not Talking Basketball to the Media and Kyle Larson’s N-Word Incident.