You are here: Home / Music / Group-Think: The Overrated Eminem Cypher 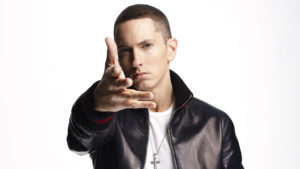 When it comes to live music shows, I don’t watch the initial airing and instead tune in during subsequent re-airs. I do this to eliminate my view on the program from being influenced by the heavy social media presence that is cultivated around the program in real-time. Having said that, I didn’t watch the Eminem freestyle during the 2017 BET Hip-Hop Awards as it happened (generally speaking, I don’t watch award shows period).

I caught wind of it when I got home from work and took a few minutes to scroll through my Facebook feed. The reactions were pouring in and they all sounded the same: “THAT WAS THE BEST FREESTYLE EVER!”

Needless to say, when I saw the reactions, I had to view it for myself to see what all the hoopla was about. In the back of my mind, I knew that there was no way it was as good as people were purporting it to be, and that there must have been some theme inherent in the performance that made people go so crazy over it. Alas, I was right.

The Eminem Cypher WAS WACK.

Listen, I have the utmost respect for Eminem as a rapper, most of which he garnered from me with his first three bodies of work. The Marshall Mathers LP in particular is a project that I always felt was ahead of its time in terms of the way that Eminem tackled political correctness and this country’s penchant for attacking messengers (rappers and rap music) instead of the actual causes of debauchery and self-destructive behavior (bad parenting and a tumultuous upbringing). It is an all-time classic tonally, and because of Eminem’s god-given lyrical prowess.

That being the case, in my opinion, that Eminem ceased to exist once he gave us The Eminem Show in 2002. Encore was awful, Relapse was worse, Recovery was wildly overrated, and The Marshall Mathers LP 2 desecrated the namesake of the classic first entry in that series.

He just didn’t rap the same. His flow always sounded disjointed; making words rhyme for the sake of rhyming. It ceased to be smooth and coherent. It was just jumbled wordplay and a sometimes weird, goofy accent. Every time I thought this might be the point where early Eminem returned to form, I was met with disappointment.

Since then, my expectations for anything Eminem has done have remained tempered. I safeguard myself from being disappointed by him and from being influenced by the myriad of Eminem stans who will tout whatever he does as classic-worthy even when it’s trash. This freestyle was no different. He made words rhyme for the sake of rhyming. It was jumbled and disjointed.

My feed clued me in as to why it was being so heralded. People like LeBron and J. Cole chimed in talking about how what he did was so needed to bring about change. At that moment, I figured this thing must have been politically-charged in nature.

What I proceeded to watch was Eminem do what is perhaps the least courageous thing that anyone with a platform to disseminate a message can do – go in on Donald Trump. All of the expected quips aimed against Donald Trump were present: insult him, call him a racist and bigot, accuse him of leading the country in a bad direction, accuse him of being divisive and counterintuitive to unity. All of the things that everyone else in the mainstream media or anyone else with a viable platform has already done.

I am not saying that any of those things are untrue. Trump may very well fit the build for every negative character assessment that is levied his way. What I am saying, however, is that Marshall broke no new ground.

Countless people before him, many rappers included, have already lamented what Eminem lamented. The difference here was that it was Eminem who was saying it; an Eminem whose legend within rap annals is so engrained, his election (no pun intended) into any socio political debate is consumed much differently than anyone else.

His election into that arena is consumed so differently, in fact, that people completely disregard the musical merits of the freestyle as an actual rap and instead infuse greatness into it because they love the message so much. People were genuinely applauding the freestyle as if it were the  caliber of Kendrick Lamar’s cypher from a few years ago. It wasn’t even close to that.

What we are in this immediate, social media-obsessed generation is a hive of group-thinkers who simply go along with the popular agenda that is being fed to us by those whom we have been subconsciously controlled to look to for leadership.

This is especially true in minority and poor communities. Because we have no examples of actual leadership figures to look to in our immediate upbringings, we are subliminally directed towards rappers, athletes, and entertainers to tell us how to think largely because their backgrounds, before fortune and fame, were similar to our own.

If they say that Trump is evil, we must also believe that Trump is evil without doing independent research to make our own assessments. These messages get blasted on social media, and before you know it, what we have is a colony of group-thinkers who will bask in anything anti-Trump that comes along. Couple this with the larger-than-life namesake that Eminem carries with him, and you have what amounts to a cult following that will cosign a bad freestyle as a good one simply because the narrative is in tune with what they believe.

Once again, I am not saying that Trump is not what everyone says he is. What I am saying is that I have far too often encountered conversations, whether on TV, social media or in public, in which people are regurgitating the same points; and none too deep. No one is really comprised of thoughtful, educated and solution-oriented opinions in regards to Trump. They just talk about him being a bigoted white supremacist. Nothing productive at all.

If just one of these rappers – since we look to them for guidance and leadership so much – actually got into the nitty-gritty of talking about how he is unqualified to be President from a resumé standpoint, I would lend credence to the idea that they should be listened to. Few have done that. The ones who have aren’t listened to.

We’ve just assigned credibility to their opinions because they are black (Eminem being an exception) and we are black, plus we like rap, therefore what they say is golden and we should be agreeing with them because they look like us and like the same things we do. It’s illogical.

As an aside, why are people like Iggy Azalea and Rachel Dolezal deemed appropriators of black culture, but Eminem is not? If Iggy Azalea went on MTV and started rapping about how much she hates Donald Trump, would we love her and accept her as part of the culture then? Something to chew on.

The Eminem freestyle was what it was: a poor freestyle that carried with it a message that is of the majority opinion. It became great because it was anti-Trump and it was Eminem who was delivering it. Otherwise, it was garbage. Bars were weak.

If more of us thought for ourselves, these events would be able retain more of a proper perspective. Since we don’t, what we get is the best freestyle of all time. Give me a break.

If you like this and other posts on Conscious Approach, please share it on your social platforms using the share links at the top of this page!